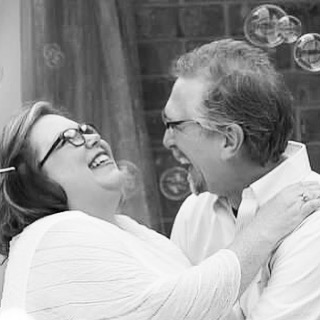 Today, is my 3rd anniversary, the end of one year and the beginning of another in our marriage. I still have moments when I can’t believe that I am Mrs. Douglas. I get to watch him work around the house. I hear his wonderful piano playing. I spy him coaching my daughter how to install cabinets or floors or plumbing. I see him sleeping next to me and say a prayer of thankfulness for this journey in my life.

Our marriage hasn’t been smooth sailing. There have been lots of bumps along the way, some bigger than others. And we have survived. We have learned that their are friends that stick with you through thick and thin. And sadly, that there are others that are just along for the fun and disappear during stress. We’ve endured snide comments and remarks both before and after our wedding. And, through it all, I am so glad that we are together.

I’ve learned that happiness is a choice. No one person or thing will make me happy. But, our marriage has offered numerous opportunities for me to choose happiness. I’m am reminded that love can be hard. However, the benefits of loving another so completely are without measure. I know that blending two families offers immense challenges. And, I adore all five of our kids and their spouses/significant others and the effort it takes to get us all together. It’s worth it all!

As we begin the 4th year of our marriage, I am thankful for the wonderful man that is my husband. He is kind and generous. He never meets a stranger. He shelters me and treats me as if I’m made of glass. I love the compliments he gets for pulling out my chair and opening the door for me, acts of chivalry that are not often seen these days. He says what needs to be said and not just what I want to hear. He listens when I disagree or just need to talk it out. He loves me deeply and expresses that in so many ways. I am truly blessed to have him in my life.

I look forward to all the things that God will do in our lives. I KNOW that He has a plan to use both of us. I KNOW that we are loved and cherished Kids of the King. I KNOW that we will have difficulties in the days to come. And, I KNOW that I serve a God that answers prayers so I continue to pray for the miraculous and the wonderful in our lives as well as those that surround us.

His words are kisses, his kisses words. Everything about him delights me, thrills me through and through! That’s my lover, that’s my man, dear Jerusalem sisters.

Today is our wedding anniversary.

I am so blessed to be married to this man who just wants to take care of me.

I will always be grateful for this man who opens doors for me,  pulls out my chair and prepares my first cup of coffee every morning.

I am so happy that this mans works so hard, but still finds ways to make me laugh.

I will never underestimate the value of the man who loves and serves all of our adult children.

I will never take for granted this man who is so passionate about our life together.

He is my friend, my confidante, my joy, my lover, my husband.  I love him more that I did two years ago, more than I thought possible.

Here’s to the rest of our lives together.  Whether it’s for 1 second or 1 Billion seconds, I am so glad we get to spend it together!

“24 Wives, understand and support your husbands in ways that show your support for Christ. The husband provides leadership to his wife the way Christ does to his church, not by domineering but by cherishing. So just as the church submits to Christ as he exercises such leadership, wives should likewise submit to their husbands.

25-28 Husbands, go all out in your love for your wives, exactly as Christ did for the church—a love marked by giving, not getting. Christ’s love makes the church whole. His words evoke her beauty. Everything he does and says is designed to bring the best out of her, dressing her in dazzling white silk, radiant with holiness. And that is how husbands ought to love their wives. They’re really doing themselves a favor—since they’re already “one” in marriage.

29-33 No one abuses his own body, does he? No, he feeds and pampers it. That’s how Christ treats us, the church, since we are part of his body. And this is why a man leaves father and mother and cherishes his wife. No longer two, they become “one flesh.” This is a huge mystery, and I don’t pretend to understand it all. What is clearest to me is the way Christ treats the church. And this provides a good picture of how each husband is to treat his wife, loving himself in loving her, and how each wife is to honor her husband.”

There’s nothing really spectacular about the number 8. It’s not a prime number. In the dictionary it is “the number following seven and before nine.” It’s not a symbol of perfection like seven or three. It’s just eight. But there are some things associated with the number 8.

An octupus has 8 legs.

The Octet rule in science deals with the line up of electrons.

The eighth amendment prohibits the federal government from imposing excessive bail, excessive fines or cruel and unusual punishments, including torture.

Eight track tapes were all the rage in mid-sixties thru the seventies.

“Eight is Enough” was a popular television series in the late seventies.

Eight O’Clock coffee is a well-known brand of coffee.

No one wants to be behind the eight ball.

Skaters work on their figure eights.

In music, eight notes make up an octave. There is also an eighth note, 1/8 of the whole. And, eight people making music together is an octet.

Eight babies born at the same time to one mother are octuplets.

And finally, eight is the number of years you’ve been gone. Eights years of our kids lives without your input. Eight years of spending anniversaries alone. Eight years.

I miss you, Terry. 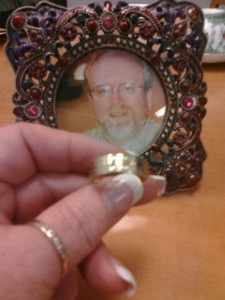 There are two men in my life that I knew loved me completely and unconditionally. And on this day, twenty-six years ago, one of them walked me down the aisle at Spring Woods Baptist Church to marry the other. Daddy assured me that it wasn’t too late to call the whole thing off and offered to take me out the back door of the church as Terry waited nervously at the front of the church wondering if Daddy would REALLY give me away. Every girl should be so blessed and so loved.

They’re both gone, now. I miss them both. I wonder how many others have been “all that (and a bag of chips)” to another person. I got to experience that feeling twice. I have been truly blessed in my life. I look forward to seeing them again in Heaven.

So, Happy anniversary, Terry. I miss you. Every. Day.

An anniversary marks a significant event in life. Most times, we think of anniversaries as celebrations. But what about those anniversaries that aren’t so great? Death and divorce leave a huge imprint on the lives they touch. And these anniversaries are multiplied by every other special event was ever celebrated. We can not avoid the anniversaries, and we do not want to celebrate. We honor the memory while touching the pain they cause as little as possible.

Admittedly, it’s easier not to remember. I’ve been told that I live life as if it’s a circle. I always come back to an event. Some people live life as a straight line and just move away from unpleasant events. Yet, those sad anniversaries are just as important as the happy ones. These anniversaries give us a chance to review the past year, to see what growth we have achieved, to see that we are still living. We are given a chance to reflect on what we currently value, what is really important. While I don’t want to dwell on the rough times, I do think there is value in remembering. I guess I’m looking for whatever good there is to remember. I want to find value, and justify the pain that shoots thru me at odd times.

Too often society defines how we should react. We are told to be strong. Be brave. Don’t look weak. Don’t get mad, get even. And, the expectation is there: Get over it. Move on. The first year in a child’s life is measured first in days, weeks, months and eventually years. Anniversaries are often measured the same way. But, after the first anniversary of a death or divorce, we are supposed to stop noticing the passing of time. After all, its been a year. You should be “over it”, right? I expected that first year of widowhood to be hard. I was surprised how hard the second year was. I wasn’t “fixed”. I still had issues. I didn’t cry as much and the days weren’t as dark, but the scars were still fresh and tender. I was moving forward with life and any admissions of grief were frowned upon by most. I had little patience with my own progress. I often felt guilty about grieving because it showed weakness. I was blessed to have friends that understood, accepted and encouraged me to be honest. Never underestimate the value of a strong shoulder or a firm embrace. These can quite literally save a life.

My faith was all I had left when death destroyed my life. I had my hope. And while hope and faith are good, they don’t remove the pain or the regret. So often in the darkest days, I thought I was letting God down. I wasn’t recovering fast enough. I was too sad. I was angry. I was lost in a world I didn’t understand and I didn’t want to be there. People that had offered support, the people I thought I could depend upon drifted away and moved on with their lives. I had to inch forward into the world around me, careful not to make anyone uncomfortable with my neediness. I had to learn to trust myself and others, again.

As each anniversary comes and goes, I remember what used to be. I wonder what might have been. And, I mourn the losses. And, I remember that I am alive and I have a purpose. I believe that God has a plan for my life even if I don’t understand or (sometimes) agree with it. Each year gives me a chance to measure how very far I have come and what I have accomplished. I’ve learned to celebrate the inches instead of bemoaning the shortage of miles. The anniversaries still hurt. They always will. And, I will continue to celebrate what I can as each year passes.